Hi Dudes, one thing I hesitated was doing my own Oil change. After calling HD and asking for an appointment, they told me it would be in a week.

I wanted to do it now. So my friend convinced me to do it. I have to admit my first time doing so. It was not easy since you need proper tools. So I went off to the general store and got all I needed to do the work.

Other than a few spills on the pavement and some other mishaps 🙂 it went pretty well.
Thanks Nick.

Hey Born2Ride,
Two weeks ago we went for a beautiful bike ride in Vermont and New Hampshire. Weather was great and road were excellent. This time we had a new Born2Ride member. He came along with us for his first long rides.
The Story begins. 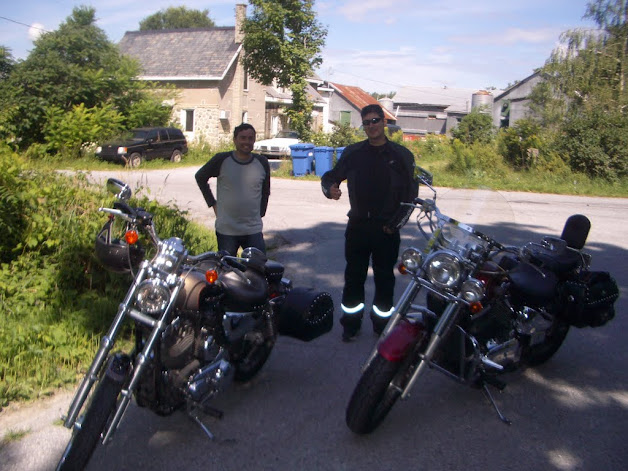 On Canada Day, Thursday, July 1st I’ve decided to go for a trip to the USA. Simon had a day off and I called him up to see if he was in the mood for a day of riding. Of course he accepted. So 8am, I was at his place and we both brought our passports along.  :)

I have to admit the the ride was not that pleasant since the weather was not cooperating with us. It was a cool autumn day, around 12-15 degrees outside.

Anyways we took what we had at the moment and chose to set off for a small ride. The ride itself was great. No car, no nobody. We were alone on the streets of Quebec and New York State.The Qc streets were awful of course. As we were heading south I couldn’t wait to hit US soil.

As usual, Simon rode thought the back roads and we saw the usual farms and animals. Also, in the morning we had some different smells which were pretty good. Sort of a pine forest fresh scent. You had to be there.

Now, the good part, crossing the border. Once we passed the usual questions at the border we noticed, in Malone, we were directly heading towards a rain storm. We were riding in between these clouds and dodged all rain that day ! ! ! ! Yeah really. Just check our map below. Trust me we weren’t lost or drunk. We were avoiding the clouds  :)

Pretty fun actually. Ok we stopped at a store for some snacks called the Mountain Mart. Let me tell you they make a killer sandwich. Just order the ‘Mixed Sandwich’ and you’ll thank me later. Later Simon decided to push it up one notch and towards Vermont. So went to Isle Lamotte and called it a day. Check out out the pics and look at our map.

You are always welcome to join… Just sed us a mail. We might crate a group for a weekend trip. I’ll keep you posted.

I’m preparing for the last ride of the year by heading out to the north east. To be more exact, St-Ambroise-de-Kildare. Were are going there to pick up a spanking new motorcycle with my new best friend 🙂 Were picking up Kawasaki V-Strom 650 all equipped and heading out for a cold ride. Yes, I know, cold. Usually, I do not go do cold rides, but this time, I’ll make an exception.Â

We leave Friday at noon, the weather seems to be on our side (see wunderground link).

Now, “a la my friend Willie style”, I will enumerate my gear for tomorrow:

I must admit the ride was pretty fun. The weather was a bit cold but the clothing I wore saved me from frost bite. Sven also did a good job with his new motorcycle.  Here are the pics.

Yesterday morning we headed out again for fun and adventures, but this time we headed East. When I arrived at Simon’s place, we were thinking of of visiting something new. He recommended Sorel-Tracy. I, of course, did not mind at all. So we hit highway 30 and headed eastbound. The weather was not too cold with a little wind but nothing too bothersome.
We found some great resting spots as we drove along the Yamaska River. This ride reminded me a lot of the Vermont area as the grass and fields had many colors of green. Also there were some nice hills and a little curvy roads to speak of. Nice for a beginner to get the hang of the roads. We were surprised at the beautiful scenic roads and we will surely return to this nice area.

View Sorel and Yamaska river in a larger map.

As I am blessed with two kids, I have realized that my motorcycle rides will be less often. Well yesterday guess what, both kids went to sleep and I had a 3 hour window to go riding. So I literally ran out of the house went to my Harley and started it up. I have to admit the bike was a bit rusty but after a couple of minutes of warming up the bike was ready to go.

On my way to start my adventure, I have to cross a bridge and ride a little on the highway. This ride was somehow special to me since I realized how lucky I am to have my two boys in my life. I’m telling you riding makes you think. But, you should also check your blind spots :). Anyways, back to my story. I realized that I am surrounded with good family, friends and co-workers (I am starting to miss these guys). Yep, I’m pretty happy.

I stopped at a corner store to buy myself a small refreshing drink for my pit stop in between my ride. And back on the saddle again. The weather was beautiful. The birds were chirping, the lawn mowers were buzzing and not one sigh of a car around me. As I only had 2-3 hours, I decided to go slower and enjoy the scenic view. Things change in a month; corn fields are fully grown, the River has a different texture, it’s beautiful.

Maybe next time I’ll invite some friends over for the ride as my time is pretty tight these days around.

I returned back home near the Rang du Quarante street. I guess it’s back to my little family 😛

I can’t wait for my next trip 🙂

Here’s a direct link to the map.

I would like to give you a quick update on our friends who is currently crossing the country by motorcycle. As of yesterday, he’s in San Diego, California !

Way to go Dude !!! You are the definition of a Born2Ride. Next year I will do something similar.

For updates, use google translate and copy/paste his blog link.

Lake Placid, 540km
Hey everyone! Here is our story of Lake Placid. As you remember, last time we ‘chickened out’ from the ride and just plain cancelled it. We this time we made sure that: “Either Rain or Shine we set off to the unknown.” Well, we do know where going…. But anyways the “Either Rain or Shine” part was true.
Btw, please excuse my blog as I have not yet got the hang of the html thing. I will try to learn as I go. 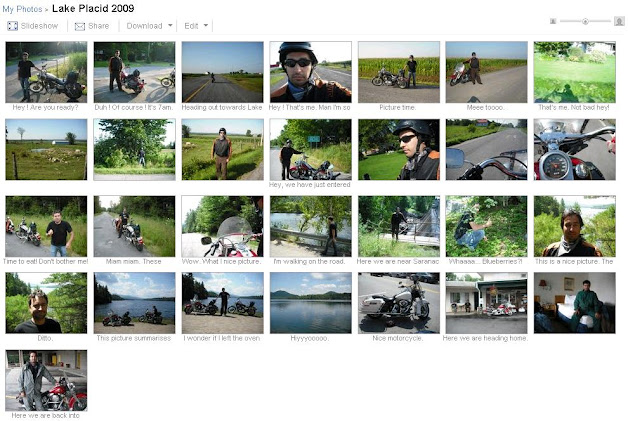 As the sun was rising in the morning, I packed my bags with the minimum accessories. Basically, change of pants, socks, tooth brush and a rain kit. There was a cold breeze hitting me on the bike as i was headed to Simon’s place. Not much traffic at around 7am. So I was riding at around 50km/h. As soon as I reached highway 104, I was getting excited as were, yet again, heading off for an adventure. Oh and an adventure it will be.
I arrive at starting destination, Simon was all ready outside preparing his baggage. We headed out 5 minutes later double-checking or gears and our passports.
As usual, we took the country road, so check out our maps for more details. My bike was tip top shape. Sure it needed some polishing, but it lasted the whole week as I was using it daily. In the morning I check the oil, gas level and kicked the tires and I was off.

Revenge on the weather.

As you may have noticed, due to weather conditions we did not goto Lake Placid for the weekend. Well today, the 20th of July, after work we got our revenge. We went for a 3 hour ride and explored the country side.

I think this was one of our best rides as we explored new roads. At first the weather was clear. Beautiful skies above us with few distinct clouds. We saw many farms including some animals like horses and of course cows.And we headed south, a small mist came too and then the real surprise hit us…. Wel, not hit, but smell. The forest, the flowers, the vegetation realease such beautiful smells that only a motorcyce rider can understand what we are talking about.

By referencing the map below we crossed many small town villages: St-Philippe, St-Edouard, Sherrington and finally Hemmingford.

Simon did it again. Pulled a super ride out of nowhere and we really enjoyed the scenery. At every stop sign, we were chatting up every town. One word: impressive.

View Revenge on weather in a larger map